The road that led to the Benda Method. Incessant technological challenges.

It was an equipment expo in Europe that first sparked founder Kazuyoshi Yashiro’s interest in bend-processing of steel material. What caught his eye was an angle bender.
The factor in using “Benda” for the company name when Benda Kogyo was launched in the wake of Yashiro Machinery & Materials Trading’s bankruptcy was Kazuyoshi’s uncommon determination to effect a resurgence through bend-processing. 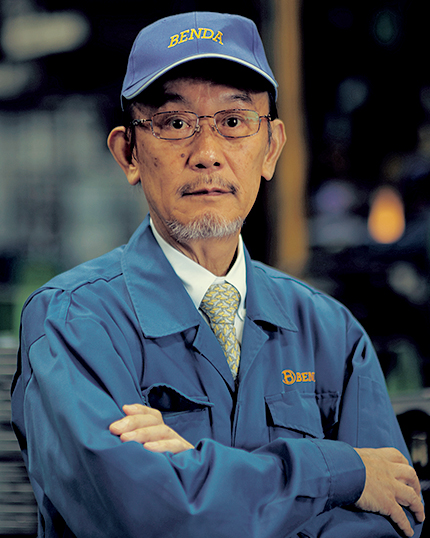 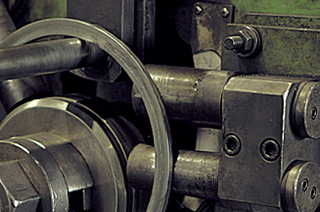 What started it was a request from a car manufacturer for us to mass-produce ring gears by cold bend-processing. What we came up with in response, after repeated trial-and-error, was a method that cuts the rings so that they have overlapping edges. The method occurred to Kazuyoshi when he was asleep at two o’clock at night – the idea for it came in a flash during a dream. The apparatus for it was fabricated by Koji. 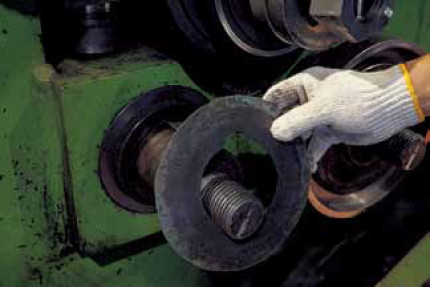 Thanks to this method which had taken half a year to devise, the decision was taken to go into mass production.
We ourselves designed the equipment required for mass production. Once again it was Koji who concerned himself with the automation and standardization of the equipment.
The Benda Method underwent further enhancement into the course of mass production, and various innovative measures came together to establish it.

The unique qualities of the Benda Method come from the improvements and modifications with which it has been polished from day to day by the craftsmen who use it. It truly “was not built in a day”.
What has to be carried on from those days is not only the technology. It is also their manufacturing spirit, with all the members pursuing possibilities together and never giving up halfway despite repeated failures.
As Koji Yashiro said, “there’s no end to improvements”, and if we repeatedly use our ingenuity and effort to make things even better, instead of resting content with things as they are, then new technologies and possibilities should come into being that will enable the Benda Group to take great strides forward.